We use cookies to operate the site and optimize services. By selecting "Agree and close", you agree to processing of personal data that may be obtained from cookies.

The necessary cookies provide for basic functionality, e.g., help to make our site safe, accessible, and, most importantly, functioning permanently. We cannot stop using these files, as our site will not operate properly without them. However, you can disable them yourself by changing your browser settings, but this may affect the functioning of the site.

These cookies allow us to count visits and traffic sources. This way, we can measure and improve the efficiency of our site. They help us to recognize the least popular pages and see how visitors navigate the site. The information collected by these cookies is often aggregated, and therefore anonymous.

These cookies can be set via our site by our advertising partners. They can be used to profile your interests and show you personalized ads on other sites. They do not directly store personal information but are based on the unique identification of your browser and Internet device. If you do not allow these cookies, the ads shown to you will be less relevant.

As PrivatBank reported (https://en.privatbank.ua/news/2021/8/18/1463) on 18 August 2021, pursuant to an order of the Israeli Court dated 26 April 2021 (the “Court Order”), the Bank has been publishing notices in Holos Ukrayiny newspaper in order to serve the Israel claim on Igor Kolomoisky and Gennadiy Bogolyubov, as well as on other defendant Vyacheslav Kartashov (a longstanding confidant of theirs and currently the Head of the Department for Legal Affairs of PJSC Ukrnafta), under the Hague Convention on the Service Abroad of Judicial and Extrajudicial Documents in Civil or Commercial Matters (the “Hague Service Convention”). The Israel claim concerns an alleged misappropriation scheme by which at least USD 600 million (approx. UAH 16 billion) was unlawfully extracted from PrivatBank between 2007 and 2011 and transferred to a bank account held with Israel Discount Bank, one of the largest banks in Israel.

The Court Order was made by the Israeli court against a background of failure by Igor Kolomoisky, Gennadiy Bogolyubov and Vyacheslav Kartashov to appear before the Ukrainian courts that were to serve the Bank’s Israeli claim documents on them pursuant to a previous attempt by the Bank to make such service under the Hague Service Convention. The Bank views this as a clear attempt by them to avoid or delay having to answer for their actions before the Israeli court.

Under the requirements of the Court Order, the Bank was required to publish the service notice relating to each of the defendants on five separate occasions. This has now been completed, with the final service notice in respect of each defendant being published in Holos Ukrayiny on 26 August 2021. Confirmation of the publications has also been filed by PrivatBank with the appropriate Ukrainian courts in accordance with the Court Order.

Over the same period, the Bank has also taken steps to deliver the Israel claim documents to each of Igor Kolomoisky, Gennadiy Bogolyubov and Vyacheslav Kartashov at their connected addresses in Ukraine, pursuant to a separate permission of the Israel court under the Court Order for service of the Israel claim on each of them in Ukraine via courier.

Consequently, for the purposes of the Hague Service Convention, the Bank has now taken all necessary steps to serve the Israel claim on Igor Kolomoisky, Gennadiy Bogolyubov and Vyacheslav Kartashov in Ukraine. Whilst the Bank anticipates that these defendants will nevertheless continue seeking to avoid facing justice for their wrongdoings before the Israeli court, knowing that their culpability will be established as and when the Israel claim proceeds to trial, the Bank remains focused on taking all available steps to ensure that that just outcome is achieved as expeditiously as possible.

Chairman of the Management Board Gerhard Bösch said: “These latest steps taken by the Bank to put beyond any credible doubt that service of the Israeli claim has been made on Mr Kolomoisky, Mr Bogolyubov and Mr Kartashov are important steps toward ensuring that the Bank’s former owners and their accomplices face trial for their alleged serious wrongdoings. We welcome the positive progress made in advancing the Bank’s claim in the District Court of Tel-Aviv and are confident that the Israeli court will be able to proceed to examine in detail the specific alleged acts of fraud and the consequent losses suffered by the Bank prior to its nationalisation at the hands of its former owners and other co-conspirators.”

See Bank's previous statements on its claim before the District Court of Tel-Aviv here: 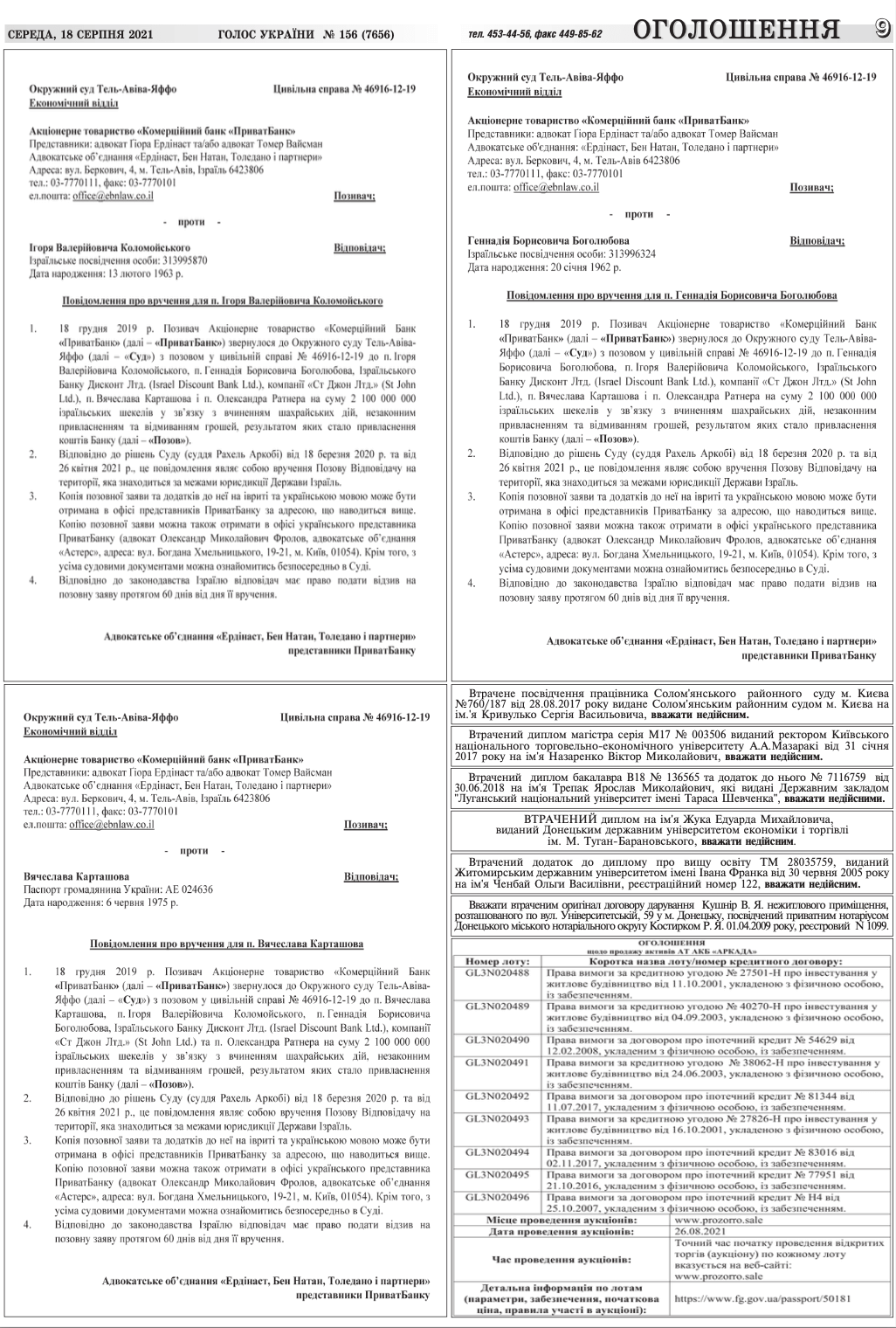 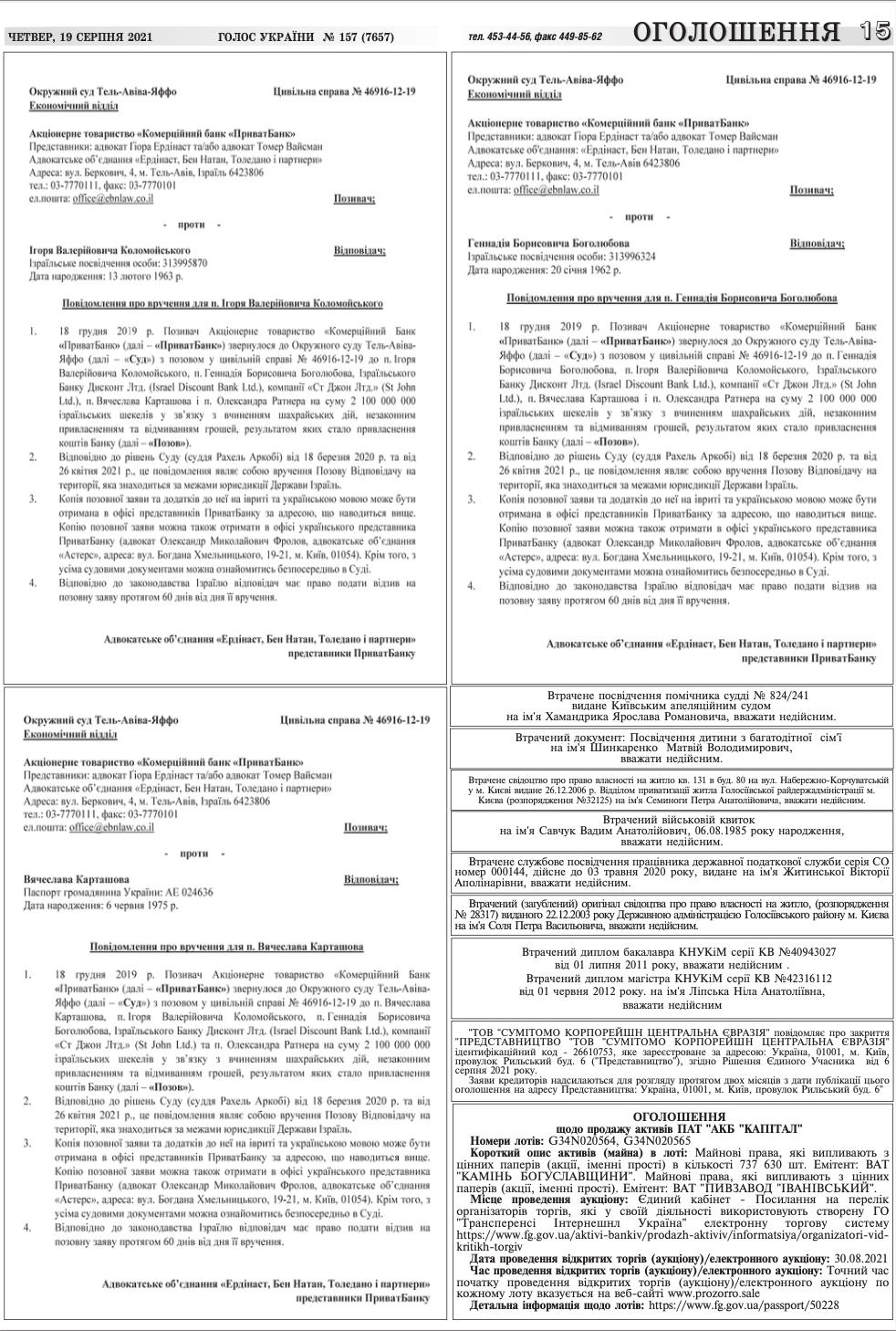 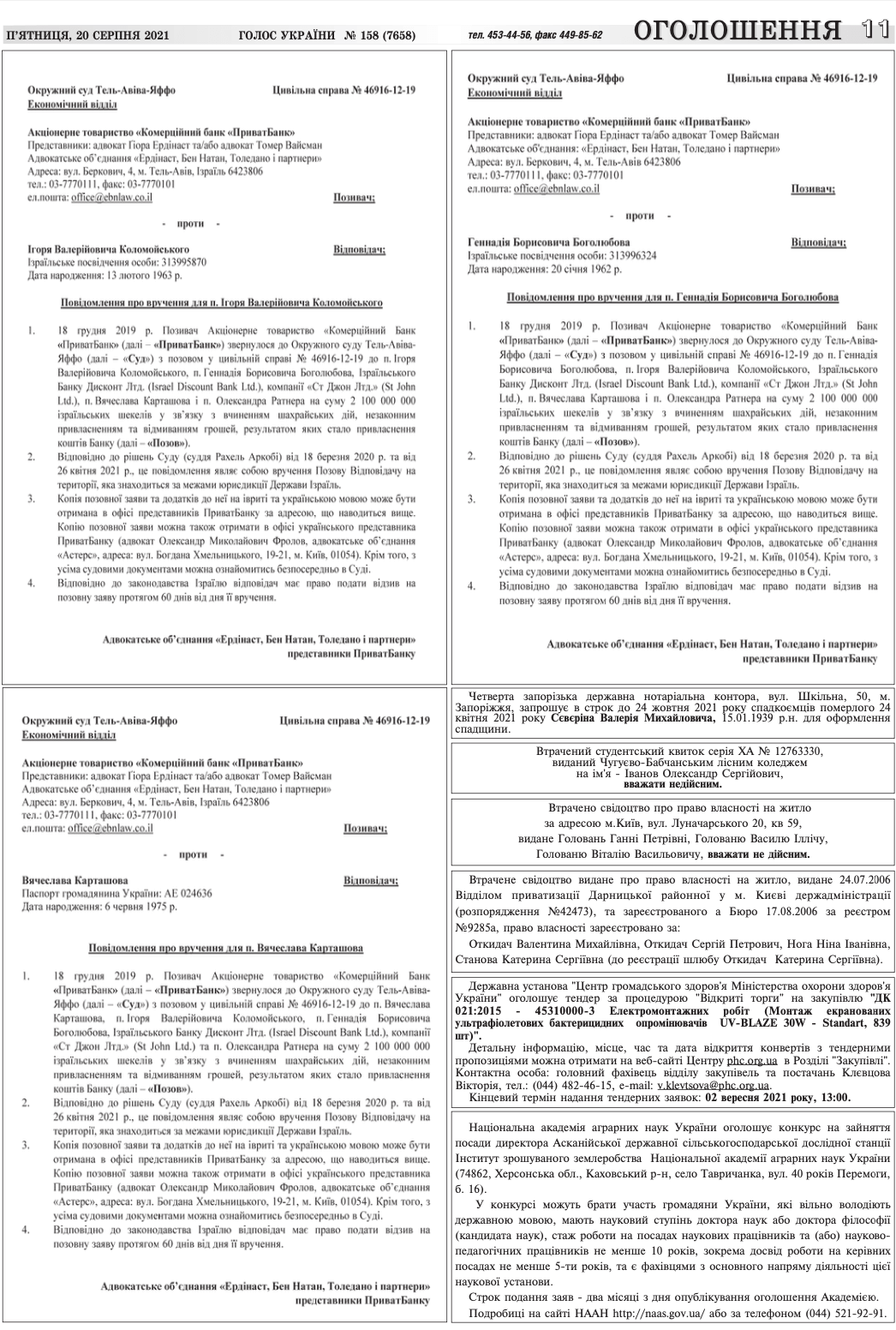 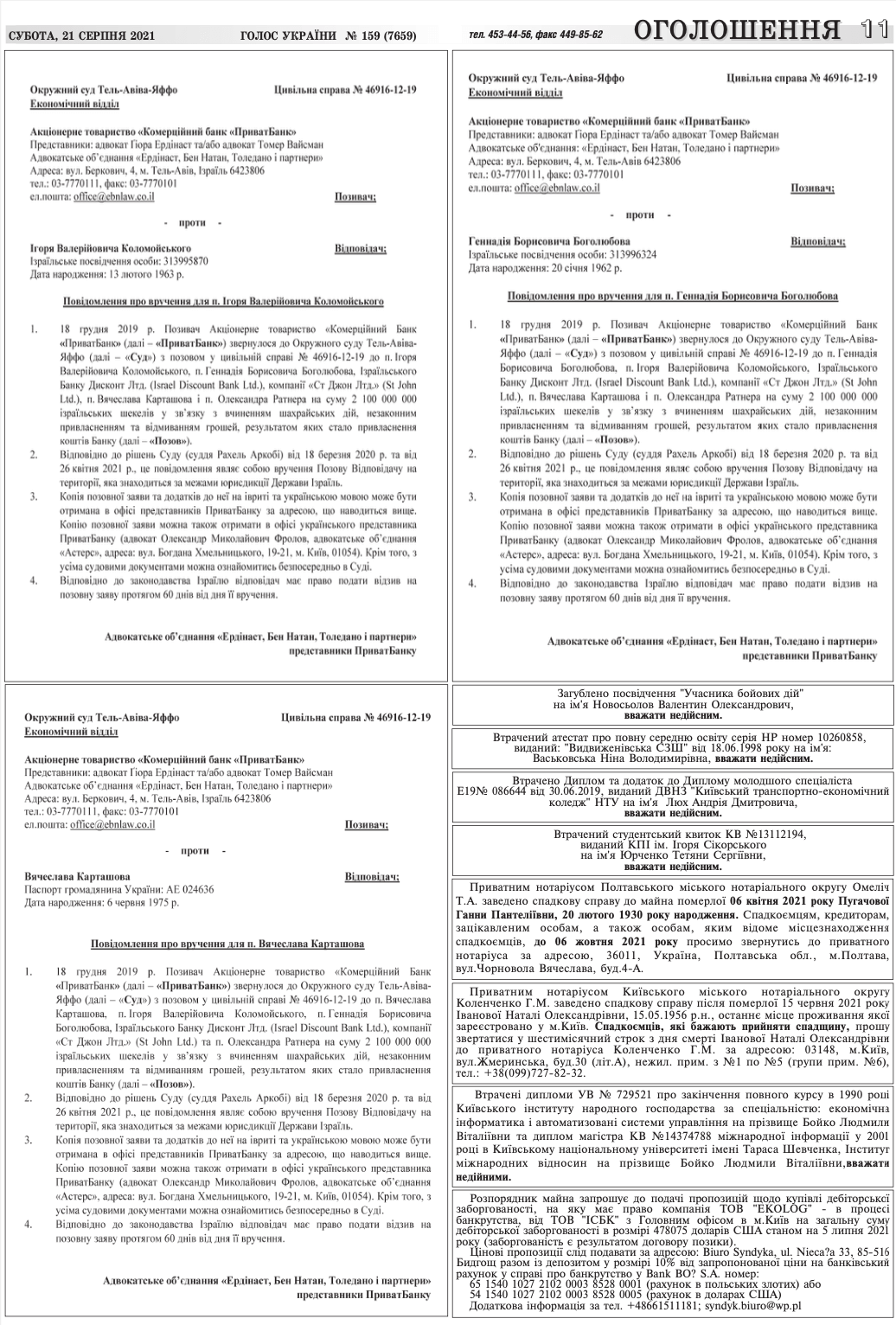 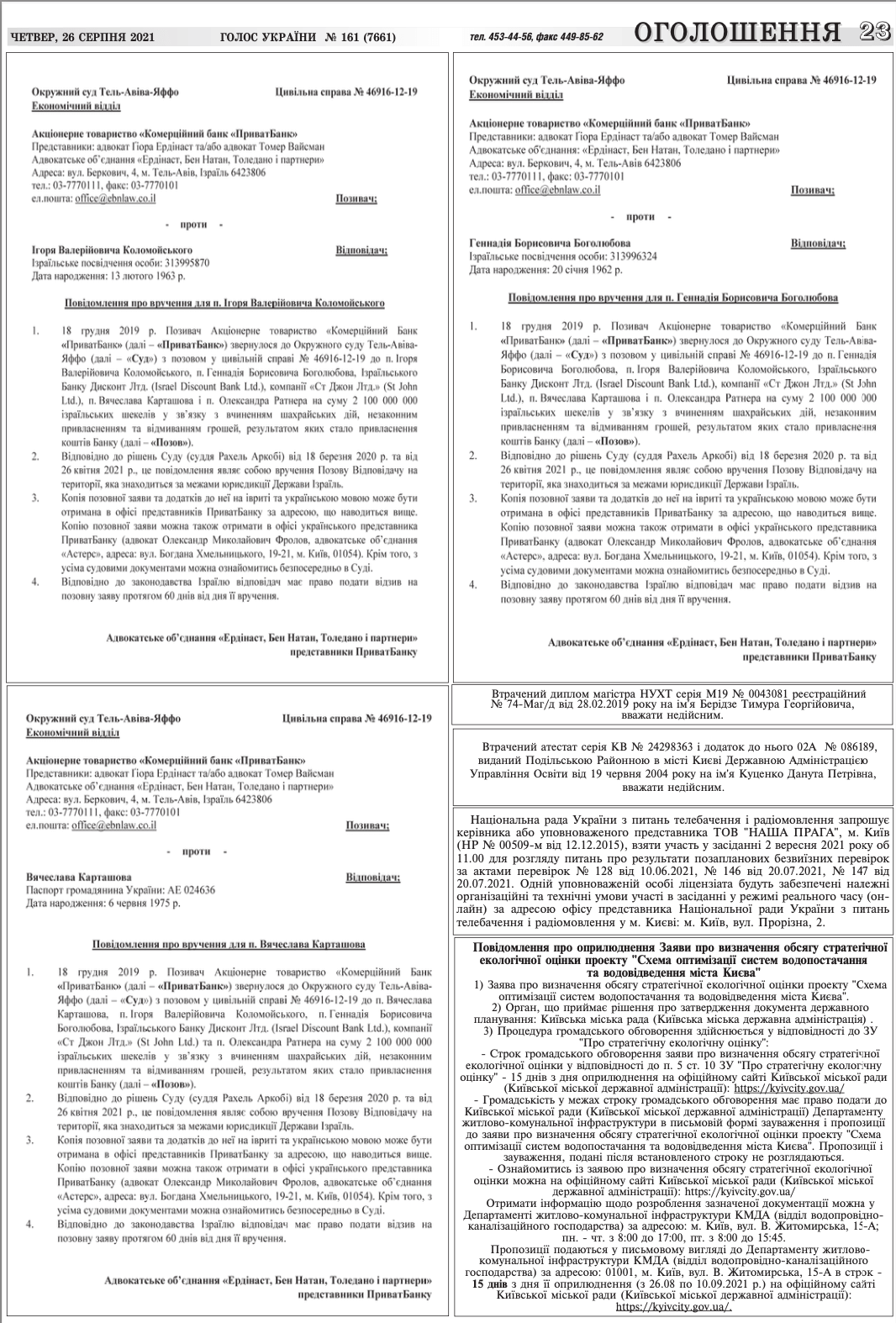