We use cookies to operate the site and optimize services. By selecting "Agree and close", you agree to processing of personal data that may be obtained from cookies.

The necessary cookies provide for basic functionality, e.g., help to make our site safe, accessible, and, most importantly, functioning permanently. We cannot stop using these files, as our site will not operate properly without them. However, you can disable them yourself by changing your browser settings, but this may affect the functioning of the site.

These cookies allow us to count visits and traffic sources. This way, we can measure and improve the efficiency of our site. They help us to recognize the least popular pages and see how visitors navigate the site. The information collected by these cookies is often aggregated, and therefore anonymous.

These cookies can be set via our site by our advertising partners. They can be used to profile your interests and show you personalized ads on other sites. They do not directly store personal information but are based on the unique identification of your browser and Internet device. If you do not allow these cookies, the ads shown to you will be less relevant.

Crediting the economy, effective work and customer support: the results of PrivatBank's work for 9 months of 2022

The profit of PrivatBank for 9 months of 2022 is worth UAH 13.8 billion, which is 7,4 billion less than in the same period last year. Since the beginning of the war, the bank took several steps to lessen the credit burden on its customers (suspension of interest rates, credit holidays, restructuring). However, due to the decrease in the solvency of the population, especially in the "red zones", the bank provisioned UAH 9.4 billion of reserves for credit risks in 9 months of the current year.

Customer benefits and canceled commissions introduced since the beginning of the war resulted in reducing net commission income by UAH 2.7 billion vs. last year. Thus, revenues from payments in retail trade networks (acquiring) equaled to half of the level in the same period of last year with a relatively unchanged volume of transactions.

PrivatBank has been continuously supporting the economy - during the period of full-scale invasion, the bank provided UAH 15.9 billion in business loans, mainly in the agricultural sector, and some of them have already been repaid. Since the beginning of 2022, the credit portfolio of business clients has grown by UAH 8.0 billion (gross).

Strengthened customer trust, modern service and uninterrupted operation of the service network contributed to the increase of the balances on current accounts of customers in hryvnia by 43% since the beginning of the year and as of 1 November 2022.

In view of the surging inflation, the bank took effective measures to restrain the growth of operating expenses, which equaled to only 5% - UAH 579 million vs. last year, whereas UAH 475 million of which are exceptional expenses in war conditions (personnel support, protection of information systems, charity). PrivatBank allocated UAH 80 million to support the army and charity. 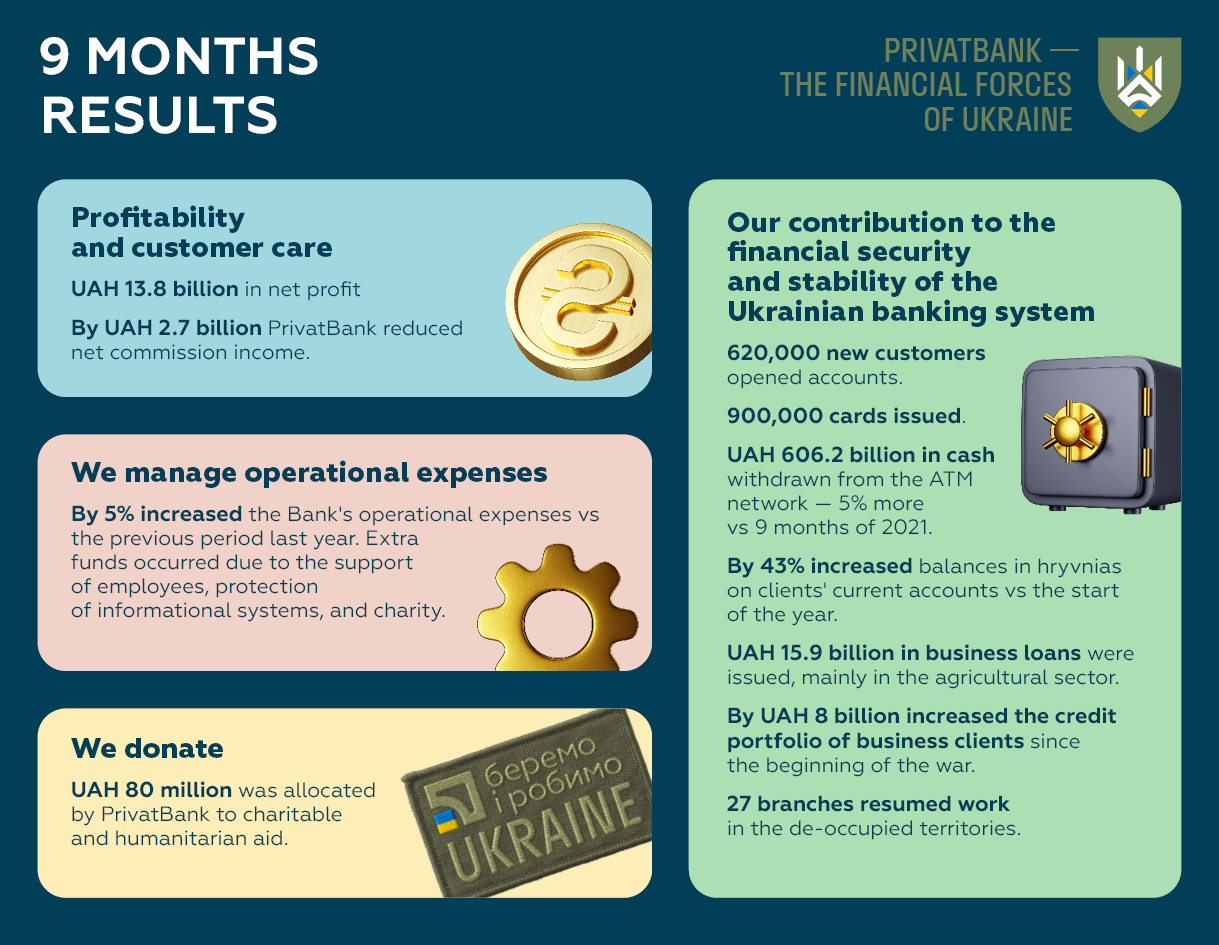 (for landlines and calls from abroad)